Friday March 7, 2014 and temps were well on there way to the 60’s.  I just had to get away from the desk and get some dirt on my boots. Let’s rephrase that…get some Mud on my boots! There was plenty of that waiting for me when I made it to Landahl Bike Park, just North of Blue Springs, Mo. Thanks to a Combination of the recent melting snow and the thawing of the ground that is underway. 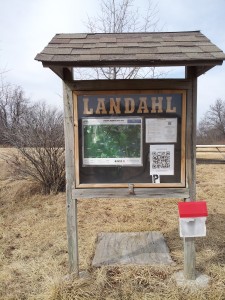 Landahl Park is located just North Of Blue Springs, Mo. There are two different entrances to the park.  I entered at the Southside.  2 miles east of 7 Highway on Argo Road.

The trail head is usually a good indicator of how well a park is maintained.  As you can see in the picture there is a very nice map station with short descriptions of each trail.  Also maps are usually available, but the storage box has cracked and broke apart since my last visit.  If you plan ahead you can print a map off from the net.  I’ll provide some links in a bit.

Landahl Park is designed with the Mountain/BMX Bike enthusiast in my mind. But if your into hiking or cross country running, don’t let that scare you off.  I only hiked 6 of the 20+ miles of trails on this day, but found most trails to be somewhat wide and very well maintained.  As a matter of fact as I was leaving I met two volunteers who were heading in to do work on one of the trails that is being rerouted.  How refreshing to see two very enthusiastic, friendly guys who obviously enjoy ‘doing their part.’

I love making my first visit to a trail system in the winter.  It allows you get a much better overview of the lay of land….so to speak.  This outing offered the chance to see through the timber and view the other trails that run through the park.  Now that I have a general feel for the place, can’t wait to hit it again this spring when the ‘green’ starts to take over!

So now my ‘exploratory’ hike of Landahl is behind me. Now to get ready for a full day of hiking at the park. Here are Some links of interest before heading out. 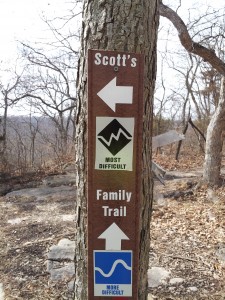 A Good starting point is by checking the Earthriders Mountain Bike Club Website.  They have a very nice map of the trails that can be viewed/downloaded here.  I have printed copy of the map and a downloaded copy on my phone.  Might want to do that before going to the park. My cell service there was pretty sketchy.

Also information on trail conditions are often found on their Twitter Feed.  if I had waited til later in the day and checked twitter, I would have known it was a muddy mess!

Before wrapping up, here is a trail marker that brought a smile to my face. The trail is not named for me, but no one needs to know that!  The trails full name is Scott’s Gun Barrel….but I like the way it is represented on the marker.  Just my name and the difficulty level.  Anyway,  there it is my first outing to Landahl.

seeya along the trail